As we approach launch, the development team is taking a close look at all of Paladins’ core systems. We’re doing so with one goal in mind: We want Paladins to feel more like a AAA game.

We’ve made great progress in recent patches, cleaning up our UI, launching our first event, and fixing long standing bugs. But there’s still one big part of Paladins that doesn’t feel as good as it could: The VIP Program.

VIP sounds pay-to-win at first blush, especially before players understand how VIP works. Even though it does not affect gameplay, a bad first impression can push some players away from Paladins.

And VIP created yet another currency in Paladins. VIP Points sit in a weird middle place between Gold and Crystals, and don’t really add anything unique.

Though we thought the system made sense at the time in Beta, as we approach launch we think we can (and should) do better.

Because of this, we will be removing the VIP Program at the end of OB69.

Wondering what this means for you?

Throughout OB69, we will rotate a ton of items into the VIP store, giving you a chance to spend your points

If you cannot spend all your points, or cannot log in during OB69, you will be compensated for any unspent VIP Points as follows:

Players will receive a Gold Chest for every 10,000 unspent VIP Points, for the first 100,000 VIP Points on their accounts

Players will receive a Diamond Chest for every 50,000 unspent VIP Points after the first 100,000 VIP Points on their accounts

At the end of OB69, players will be compensated with 4 Crystals per day of unused VIP membership time remaining on their accounts.

Each Membership includes 20,000 VIP Points, worth 140 Crystals if purchased separately. Players can spend their VIP Points or be compensated for unspent VIP Points as detailed above.

The value of the “Membership” portion is 60 Crystals, covered in this refund.

If you reached VIP Tier 3 or higher, you’ll receive a limited in-game Avatar — a new player icon cosmetic —  as a thanks for participating in the VIP program

If you reached VIP Tier 5 or higher, you’ll get the first Battle Pass — and the legendary mount in it — for free.

In addition to VIP, one other element of Paladins really stands out in the wrong way: Booster Weapons.

Even though the stats on Booster Weapons do not affect gameplay, they didn’t make a good first impression. And we’ve heard your concerns that it doesn’t feel good to rent these weapons, so we started examining how to make them permanent purchases.

Because of this, we will also be removing the ability to purchase rental Booster Weapons, effective immediately.

If you currently have a Booster Weapon rented, you can continue to use it for the time rented.

Gold Weapons will no longer have boosts attached

Gold Weapons will be permanently unlocked upon purchase

Details of how Gold Weapons will be sold are still being finalized. We will have more to share soon.

As we cleaned up Booster Weapons, we also took a look at Account Boosters. We feel they have lost some value since we removed Radiant Chests, and having three separate ways to boost progress feels redundant.

We’ll be simplifying boosting: Going forward, all boosts will be tied to the new Battle Pass. We’ll be removing the ability to purchase new Account Boosters in OB69.

Your account will remain boosted until purchased boosters expire.

We can’t wait to tell you more about the Battle Pass soon! Until then, here’s a small teaser of one of the skins you’ll be able to unlock through the Battle Pass. 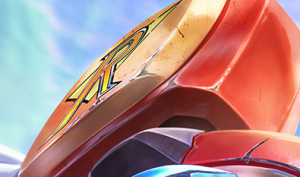