With our newest Champion Corvus in the Realm, the team at Evil Mojo wanted to share a behind the scenes look at what went into our latest visual overhaul for Magistrate’s Archives map!

You may recall back after Hi-Rez Expo 2019, our recap blog showed some of our map updates coming in 2020. And if you were fortunate enough to attend the Art of Paladins panel or watch the vod for it, you would have seen some early work-in-progress shots of Magistrate’s Archives.

Today, we’re going to be diving into some developer insights from our Environment Artists while walking you through work-in-progress shots leading to the final product you’ll see playing our Darkness & Dragons Update!

When making the updates to this map, Alex M. and Rick R. took ownership of making this map really stand out. Alex did the Karne and Valera statues, the giant Series orb in the middle, while Rick worked on much of the exterior and interior architecture as well as additional propping. We also had Sidney on the team who did an over-the-top job with a lighting pass.

“With this map update we really wanted to explore the idea of what the Magistrate aesthetic, and more specifically Corvus’ aesthetic, looks like with regards to the environment. Starting with Stone Keep and propagated throughout the game, the castle art set has never really felt like it lined up with the Magistrate’s sensibilities. The most obvious disconnect is the cool, blue green palette of the castle set which contrasts with the established palette for the Magistrate, mostly reds, golds and dark browns/grays. So we started from the idea that the stonework should shift darker and more warmly tinted, we added some metal accents to help catch the light, and we added Magistrate themed stained glass windows, to really drive the allegiance of this building home.

For the statues on either end we wanted to try and remind players that the Magistrate had roots in the original Paladins, that once both Karne and Valera were equally respected and treated as heroes, worthy of memorial. Over time, as Karne led the Magistrate to glory and the new Paladins of the Resistance rose up, Valera’s statue was neglected and fell into disrepair while Kharne’s remains well cared for to this day.

Once we settled on the idea of this place becoming Corvus’ personal study that’s when we began to explore the purple accents and abyss paraphernalia. The orb in the center of the map is obviously inspired by Seris’ weapon, though its large size probably makes it a bit unstable as the stone columns nearby have begun to play host to the souls of the abyss, warping and twisting as the souls try to pull free. We’ve scattered some pages of lost or forbidden manuscripts around some of the tables in the spawn rooms, if you look closely you can see renderings of things you may recognize from Rise of Furia or the Abyss map.

Overall we wanted to try and inject a lot of current and past lore into an older well-loved map and brighten it up to our current quality standards. We hope you have fun delving into the new and improved Magistrate’s Archives!”

“Building the architecture for Magistrate’s Archives, I wanted to convey a sinister tone. The original version had used a more neutral style taken from the Stone Keep map. With the help of Jeff on concepts, we were to transform Magistrate’s Archives into something that looked like it had been corrupted by the forces of the Abyss. Alex did the texture work and gave the buildings darker, warmer tones with updated trims and stone work. I took the building models and added more aggressive elements throughout, such as spikes and finials through the archways and roof lines. For the props, I built them with the same concepts in mind so they fit into the updated environment. I created the banners and rugs to have the Magistrate’s logo and accompanying iconography.

The updated lighting conveys a more foreboding tone with more reds and oranges, with splashes of purple throughout around the Abyssal elements in the map. For the lighting outside I took the sunny blue-sky afternoon and made it as if a sunset could be a bit sinister with an oddly orange sky. Sidney, our lighting artist, was able to take what I had started and push the lighting and the mood further.

When you’re playing through the map, you’ll now begin to notice little bits the team have left around such as the abyss pages left on the table in the image below – helping make Corvus’ home base feel more alive. 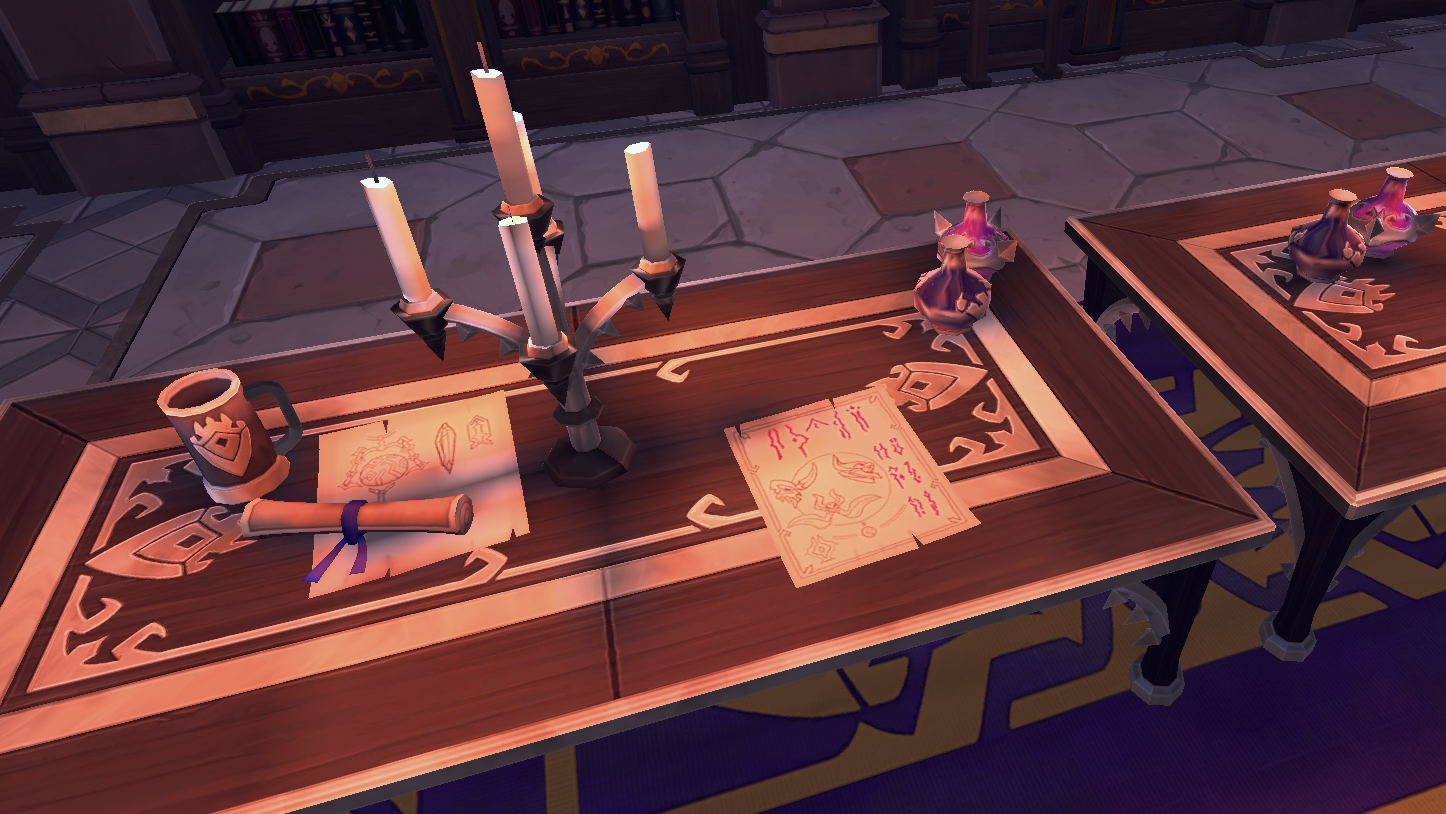 Additionally you’ll see the creation of the statues of Valera and Karne on either side. The development of these step-by-step looked like the following: 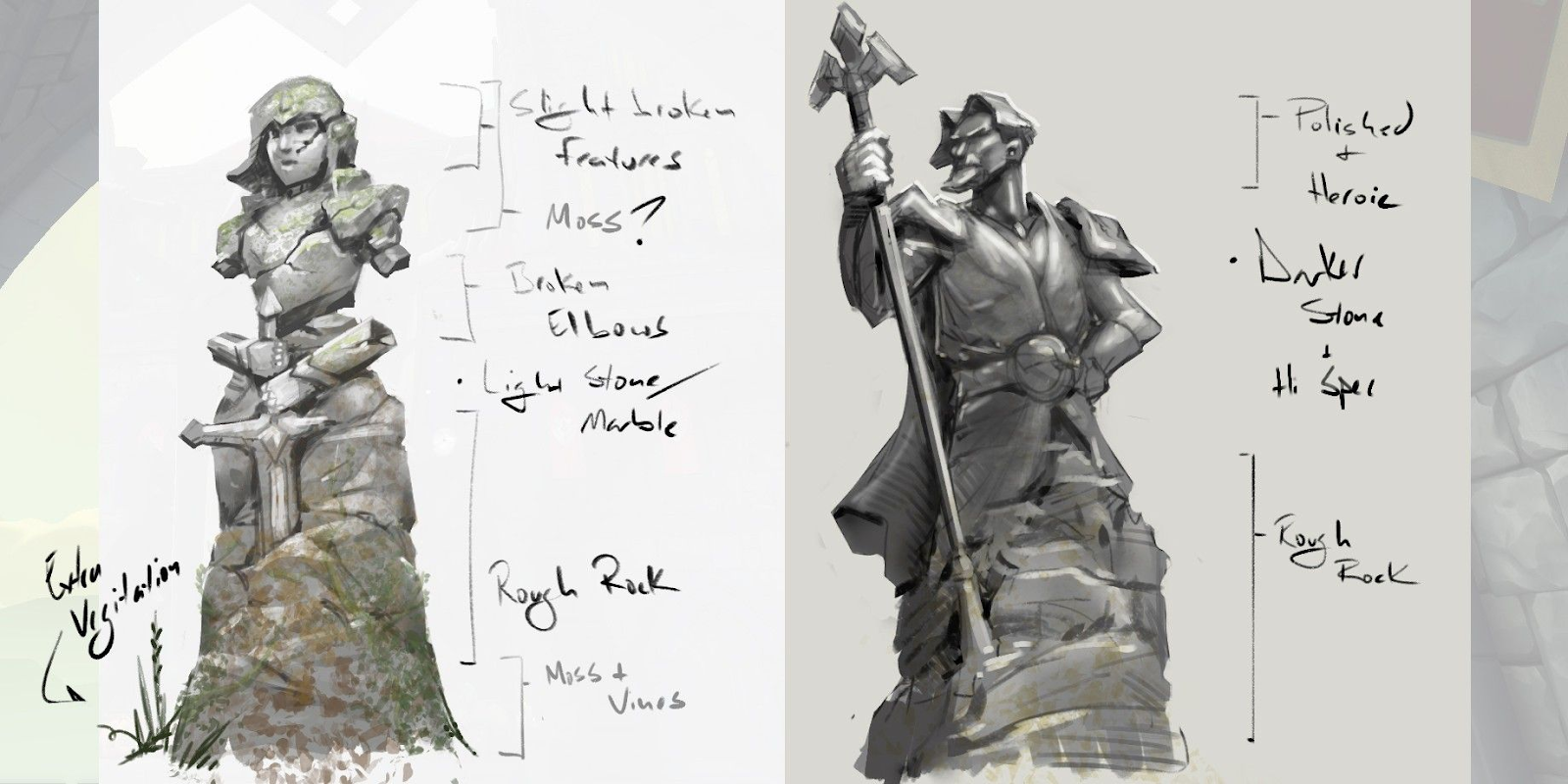 Early mock up of statue ideas. 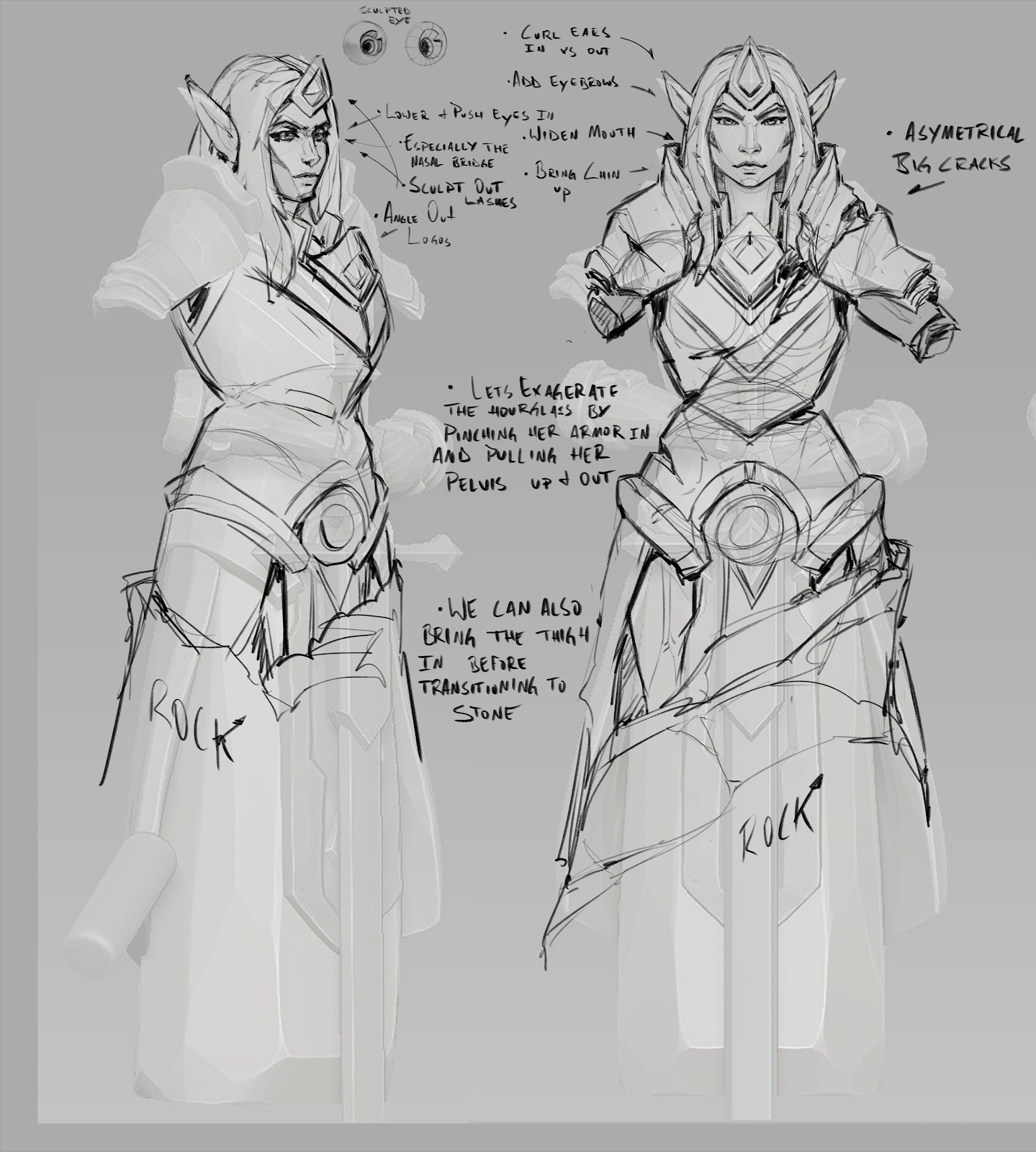 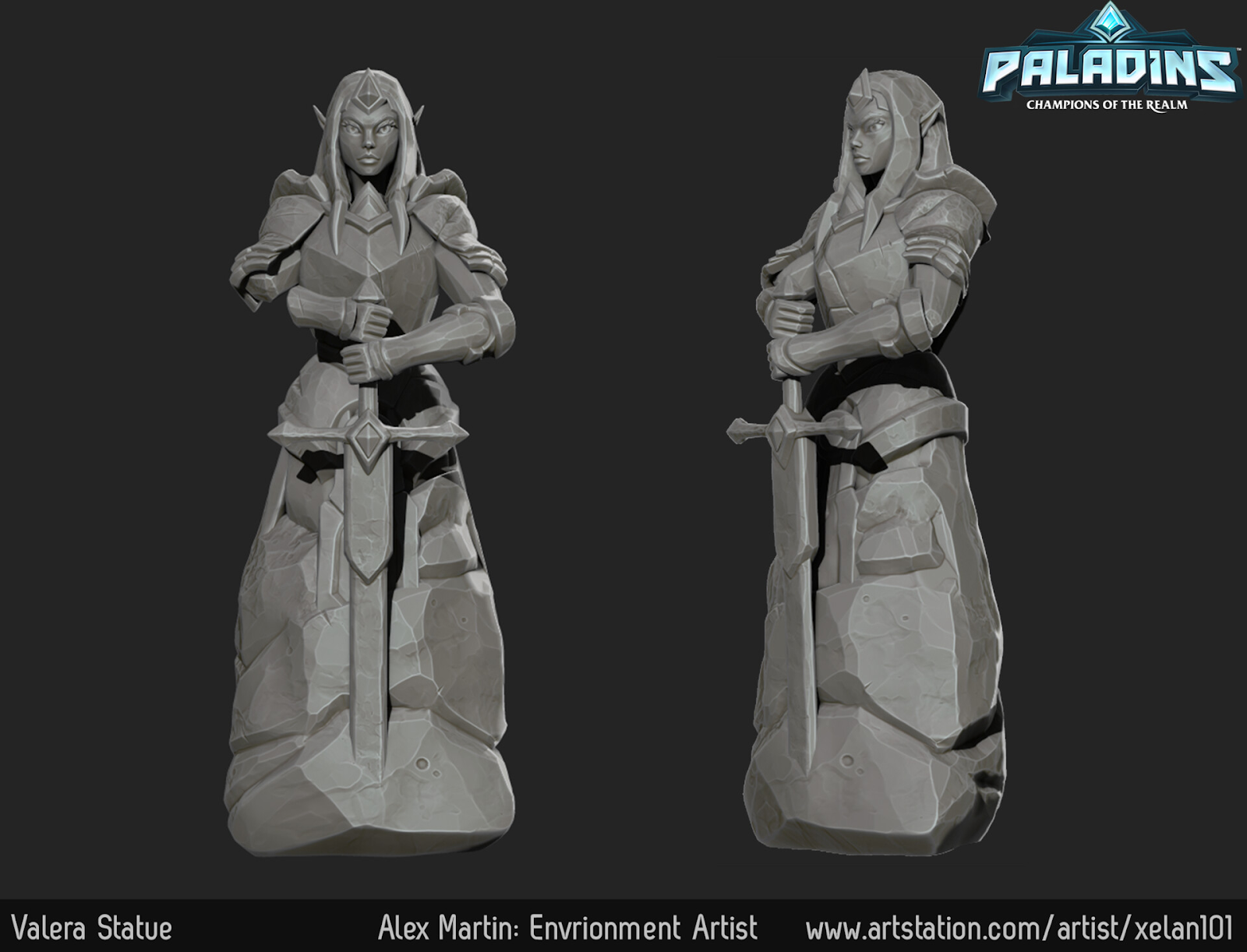 Final render of Valera from Alex M. on Art Station

Additionally there was an overall sense of polish you may notice with the textures and quality, so we prepared some before and after shots for you all to get a sense of the work that went into these. 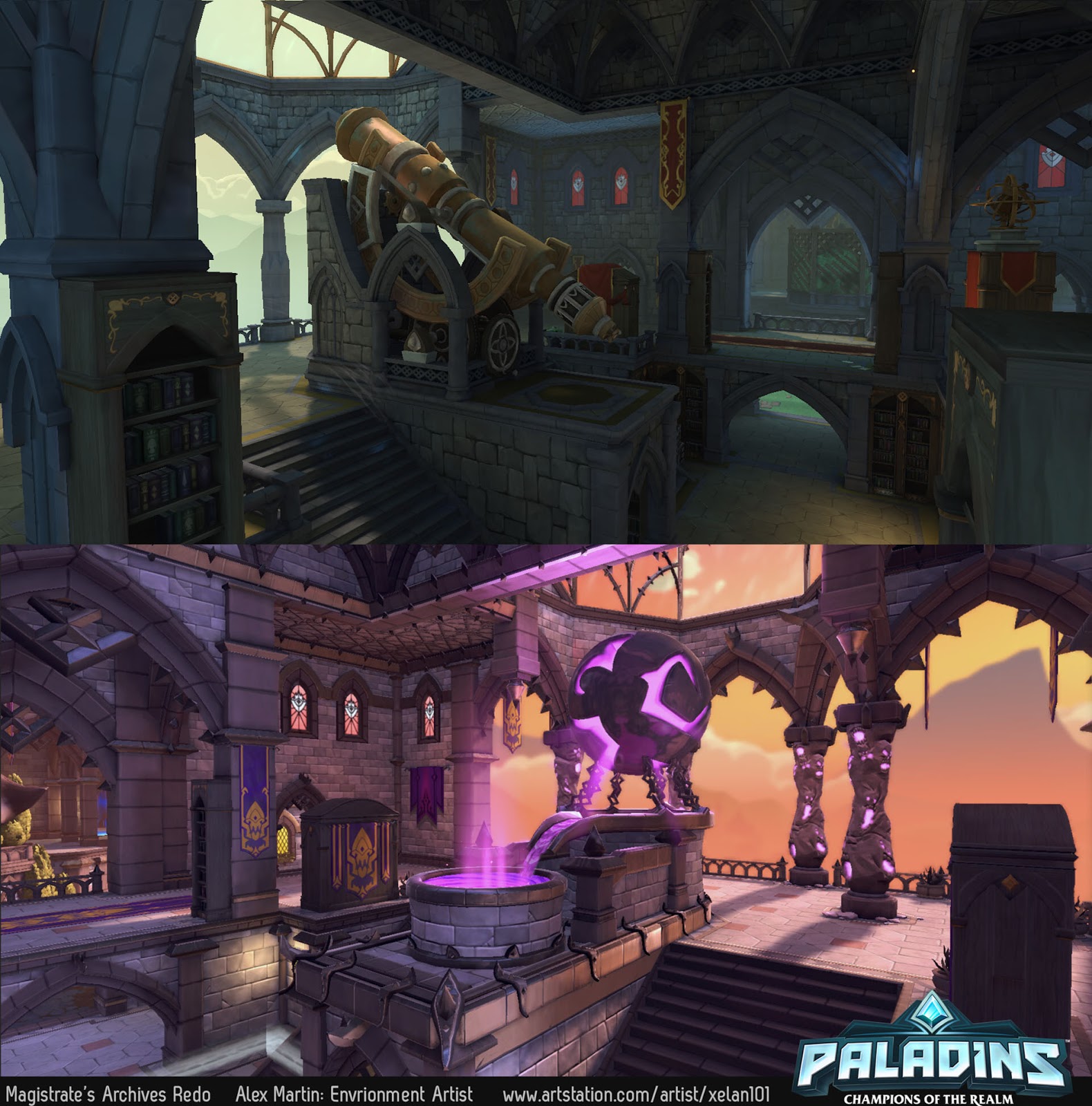 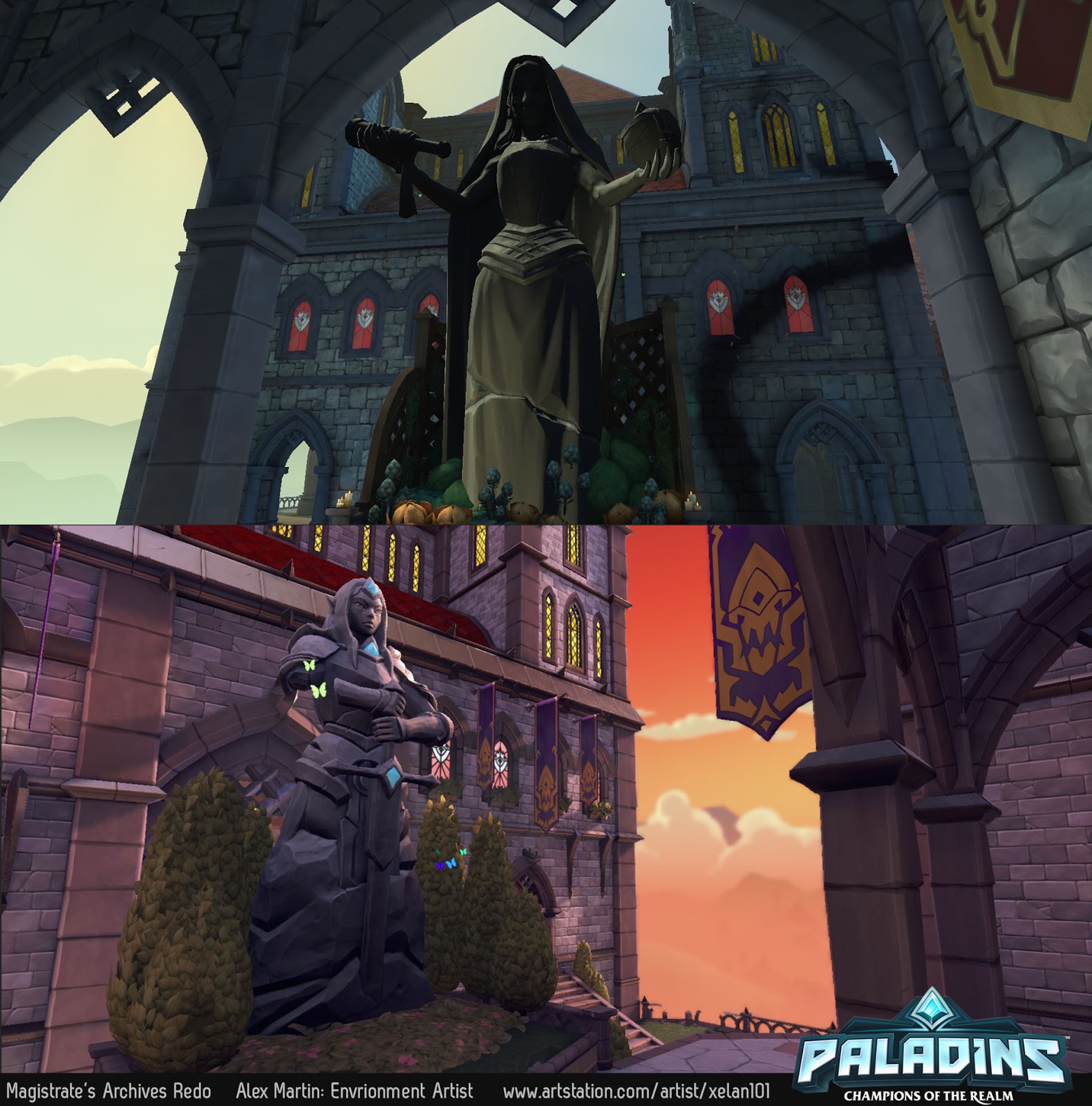 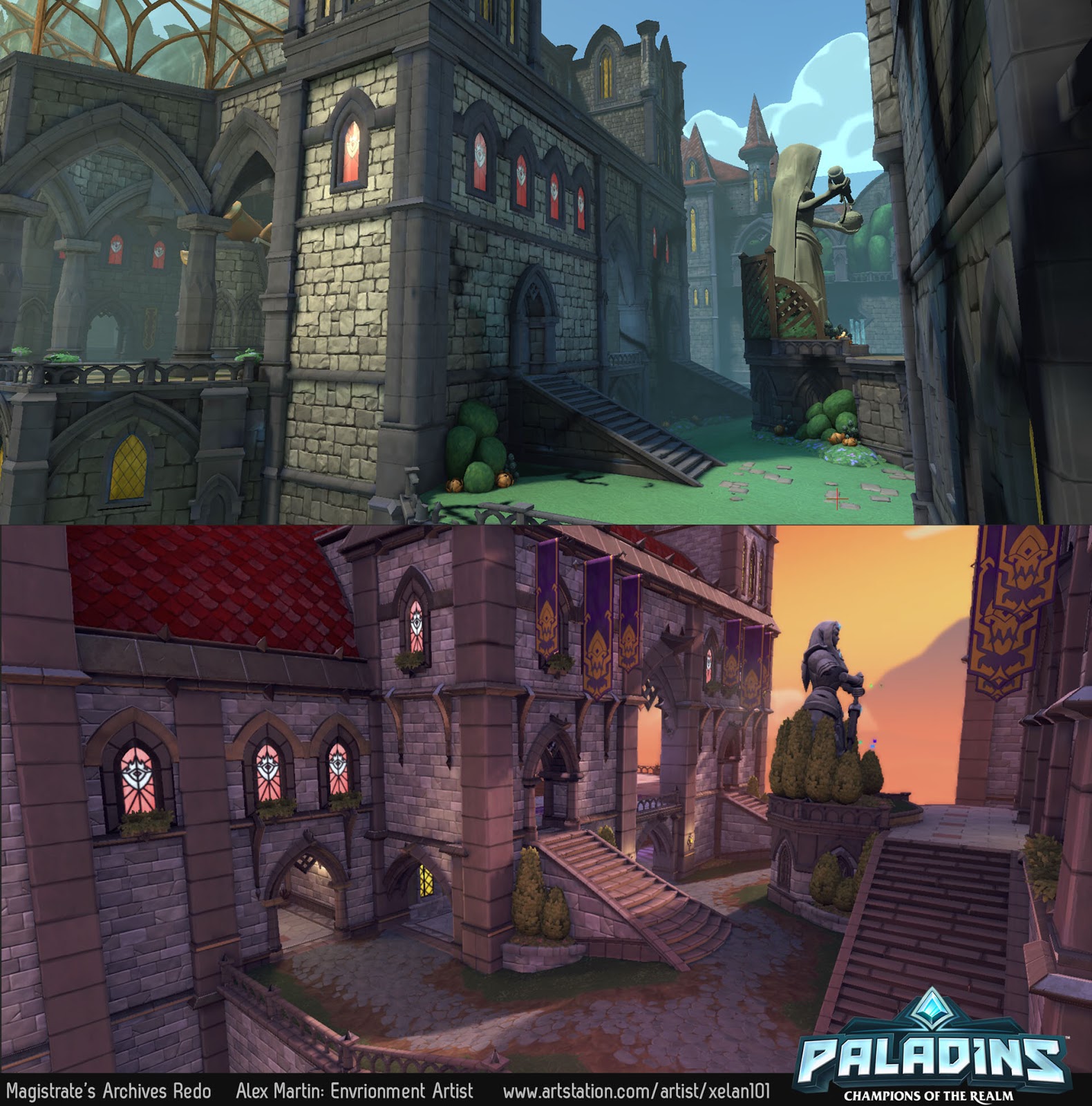 We hope you have been enjoying the map upgrades coming out this year so far! Our environment art team has been working hard to polish these maps to better the quality over time. The next on their list is Frozen Guard, and the team can’t wait to show you that when it is complete!